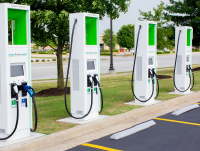 The White House on Wednesday approved plans that will make available roughly $71.5 million for electric-vehicle charging stations in Florida during this fiscal year and next year. Florida’s Electric Vehicle Infrastructure Deployment Plan was among 35 plans that the Biden administration approved under a federal program. “Making electric vehicle charging accessible to all Americans is critical to achieving a transportation sector that improves our environment and lessens our dependence on oil and gas,” U.S. Secretary of Energy Jennifer Granholm said in a prepared statement.

The Federal Highway Administration said about $900 million in federal funding is expected to result in a half-million charging stations across 53,000 miles of the nation’s highway system. Florida’s plan outlines a network of about 6,772 public charging ports along 6,244 miles of highway, according to the White House. Florida lawmakers in 2020 directed the state Department of Transportation to develop a plan to encourage more electric-vehicle charging stations. The state later designated $8.6 million to add 34 fast-charging stations along Interstate 95, Interstate 4, Interstate 75, Interstate 275 and Interstate 295 with part of money Florida received in a settlement between Volkswagen and the U.S. Department of Justice over emissions violations.