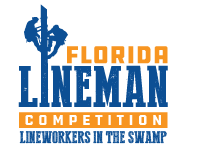 Electric lineworkers from across the Sunshine State and as far away as Colorado will challenge one another during the Florida Municipal Electric Association (FMEA) 19th Annual Florida Lineman Competition in Gainesville this Friday and Saturday. FMEA’s lineworker competition gives audiences a chance to witness these professionals in action as they demonstrate the skills they use to maintain and return power to more than three million public power customers in Florida.

This years’ event is hosted by Gainesville Regional Utilities (GRU) and will be held at the GRU Eastside Operations Center, 4747 N. Main St., in Gainesville. Festivities for the competition will begin with registration, apprentice written tests and an evening vendor expo and welcome reception on Friday, March 1, followed by an opening ceremony, competition and awards banquet honoring competitors on Saturday, March 2.

Competitors will take on tasks such as replacing cross arm beams and lightning arrestors to relocating transformers to a simulation of rescuing an injured lineworker. Competitors earn points for completing the tasks as quickly as possible and lose points if safety standards and proper work practices are not followed. Journeymen teams, which include at least one lineworker who has been in the industry for five years or more, are made up of three lineworkers. Apprentices, or lineworkers in training, compete individually. The competition typically draws between 150 and 200 participants and hundreds of spectators.

The competition is free and open to the public. Those interested in attending this year’s competition should plan to bring lawn chairs or blankets for sitting. Picnic lunches and coolers are permitted.  Multiple area food trucks will be onsite.

“Lineworkers are deeply respected across Florida for their bravery and skill. Many of the state’s citizens are indebted to lineworkers after they worked so diligently to restore power during the past three devastating hurricane seasons,” said Amy Zubaly, FMEA Executive Director. “The Florida Lineman Competition is a great opportunity for the public to see these lineworkers practice their craft in real-world settings.”

FMEA’s Florida Lineman Competition was developed in 2001 for lineworkers to strengthen their skills while simultaneously deepening their bond with one another. Benefits of participating in the competition include heightened awareness of safety procedures, goodwill among fellow linemen, increased creativity when problem solving, positive on-the-job perspectives and a network of contacts within the electrical community.

For more information on Florida Lineman Competition in addition to this year’s agenda, click here.