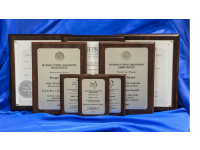 Kissimmee Utility Authority won eight awards at the 2019 Image Awards, an annual competition sponsored by the Orlando Area Chapter of the Florida Public Relations Association. The winners were announced Tuesday evening in a ceremony held at Rollins College in Winter Park.

In the community relations category, KUA received an Image Award and Judges’ Award for its “Back the Blue in Kissimmee” campaign. To mark the one-year anniversary of the fatal shootings of Kissimmee Police Department Sergeant Sam Howard and Officer Matthew Baxter, the utility partnered with KPD to host a community barbecue and unveiled a special blue streetlight – the first of its kind in the nation – to honor their memory. The story garnered 1.14 million earned media impressions and 43,370 engagements on social media.

In the crisis communications category, the utility received an Image Award and a Judges’ Award for its Kissimmee Storm Prep 2018 campaign. KUA partnered with three government agencies, UF/IFAS Extension and a media sponsor to develop a unified 40-page hurricane preparedness guide to help the citizens of Osceola County prepare for hurricane season. The utility hosted several hurricane preparedness expos and distributed more than 70,000 guides – all at a cost of just 40 cents per utility customer.

In the internal communications category, KUA received an Award of Distinction and a Judges’ Award for its employee blood drive campaign. In 2018, the utility saw a dramatic drop in onsite blood donations made by its employees. Through research, an education campaign, and low-cost incentives, donations increased by 900 percent over the previous year’s average.

In the poster and calendar category, the utility received an Award of Distinction for its 2019 Calendar of Electrical Safety. KUA invited students to use the power of art to promote electrical safety in a countywide calendar art contest. A total of 1,201 entries were received from 25 Osceola County schools and the winning artwork was featured in a full-color wall calendar, available free of charge to students, teachers and utility customers.

In the institutional video category, KUA received an Award of Distinction for its Day of Giving video. In 2018, utility employees participated in their annual Day of Giving where they packed more than 20,000 meals to aid the most vulnerable in our community and abroad. A video about the event was produced by the utility to generate awareness and support. The video garnered 26,500 views on Facebook and 449 reactions, comments and shares in the first week after release.