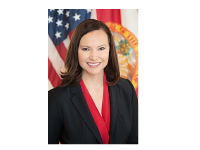 Florida Attorney General Ashley Moody is arguing that the Florida Supreme Court should block a proposed constitutional amendment that could revamp the state’s electric utility industry. Moody took a formal step Friday of asking the Supreme Court to review the proposed ballot wording and contended that the measure would be misleading to voters.

The political committee Citizens for Energy Choices is trying to get the proposal on the November 2020 ballot and had submitted 98,809 valid petition signatures to the state as of Monday morning, far more than enough to trigger a review by the Supreme Court. The proposal calls for wholesale and retail electricity markets to “be fully competitive so that electricity customers are afforded meaningful choices among a wide variety of competing electricity providers.”

It would establish a right for customers to choose electricity providers and would limit the role of investor-owned electric utilities --- private companies such as Florida Power & Light, Duke Energy Florida, Tampa Electric Co. and Gulf Power Co. --- to constructing, operating and repairing transmission and distribution systems. But Moody argued that the proposed amendment’s ballot title and summary would be misleading to voters. The Supreme Court must sign off on the wording of the title and summary for an amendment to go on the ballot. Moody said the title and summary would not inform voters that the proposal would lead to requiring investor-owned facilities to divest ownership of electricity-generating facilities. “The undisclosed chief purpose of the proposed amendment is to eliminate the main providers of electricity service to Floridians, the investor-owned utilities,” she wrote. If the Supreme Court approves the wording of the proposal, Citizens for Energy Choices would need to submit at least 766,200 valid signatures to get on the 2020 ballot.