Posted By: Garnie Holmes in Legislative/Regulatory, 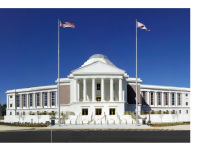 An appeals court Tuesday rejected a lawsuit in which eight young Florida residents sought to force the state to take steps to address climate change. A three-judge panel of the 1st District Court of Appeal upheld a decision last June by Leon County Circuit Judge Kevin Carroll to dismiss the case. The panel did not give a detailed explanation, but cited Caroll’s conclusion that the case involved “nonjusticiable political questions.” The lawsuit, filed in 2018, contended the state should be required to address climate change and reduce reliance on fossil fuels.

In a brief filed at the Tallahassee-based appeals court, attorneys for the plaintiffs contended that the state’s handling of climate-change issues had violated the plaintiffs’ constitutional rights. At the time the lawsuit was filed, the plaintiffs were ages 11 to 20, according to the brief. “Appellants (the plaintiffs)  are eight youth from across the state of Florida, each of whom are experiencing profound harms to their lives and liberties as a result of the state energy system that appellees (state officials and agencies) collectively oversee and operate,” the brief said. “Appellees are governmental entities that have created and implemented a state energy system that causes and contributes to dangerous climate disruption in violation of appellants’ constitutional rights.

Specifically, appellants alleged that the science is unequivocal that dangerous climate change is occurring due to human activities, primarily from the extraction and burning of fossil fuels.” In dismissing the case last year, Carroll wrote that he “lacks the authority to grant the relief requested due to the Separation of Powers Clause of the Florida Constitution. This court finds that the plaintiffs’ claims are nonjusticiable. The claims are inherently political questions that must be resolved by the political branches of government.”