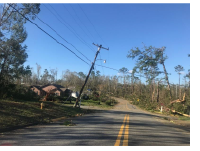 Pointing to concerns about the effects on millions of utility customers, the state Office of Public Counsel is continuing to battle proposed rules for carrying out a law that is expected to lead to building more underground power lines in Florida.

The Office of Public Counsel, which represents consumers in utility issues, has made a series of legal moves during the past week, after the Florida Public Service Commission on Oct. 3 approved the proposed rules.

The moves included requesting a public hearing on the proposed rules, a hearing that the Public Service Commission has scheduled for Tuesday. But the Office of Public Counsel argued that is too short of a timeframe. It unsuccessfully sought a continuance of the hearing and, on Thursday, filed a request to suspend the hearing and to hold a separate type of proceeding that would include gathering evidence and considering sworn testimony from experts.

“The substantial interests of the citizens require that these complex issues be presented and resolved after holding the rulemaking hearing in abeyance and conducting a formal proceeding to determine essential, but missing, facts … including an evidentiary hearing where experts for the utilities and the customers can, after conducting discovery, present their sworn testimony, subject to cross-examination, and file post-hearing briefs,” Thursday’s filing said.

The filings include issues about often-dense administrative procedures, but bigger picture they involve how to move forward with a new law aimed at building more underground power lines and trying to make Florida’s electric system better able to withstand hurricanes.
Part of the law includes a key change in the way such projects are financed. That change is expected to lead to more storm-protection projects, but it also could spur increases in customers’ monthly electric bills.

The law gave the Public Service Commission responsibility for setting rules about how the law will be carried out. The commission unanimously approved proposed rules on Oct. 3, despite objections from the Office of Public Counsel. That led to the legal wrangling during the past week, with the Office of Public Counsel arguing in a Thursday filing that the commission should not finalize the proposed rules until after it has conducted an evidentiary hearing.

Under the law, utilities will be able each year to seek approval from the commission to collect money from customers for storm-protection projects, such as building underground power lines. In the past, such projects have generally been financed through base electric rates, which are set for a number of years and include a wide range of utility expenses.

Utilities will have to file 10-year plans with the commission about bolstering storm protection. But a key part of the debate has centered on information utilities should have to provide about projects during the first three years.

In approving the proposed rules, the Public Service Commission agreed with utilities that they should only have to provide detailed information for projects in the first year. Information submitted initially for projects in the second and third years would be broader, such as estimated numbers of projects and estimated costs. The utilities would then come back annually with detailed plans for the next year.
The Office of Public Counsel, however, has contended that a lack of detail about projects in the second and third years could open the door to utilities collecting money under the new law for projects whose costs also are being passed on to customers through base rates.
“The proposed rules, as drafted, do not ensure that the ratepayers will not pay twice for storm protection and hardening as required by the statute,” the Thursday filing said.

But before the commission’s Oct. 3 vote on the proposed rules, utilities said the information about projects in the second and third years needs to be broader.

Kenneth Rubin, an attorney for Florida Power & Light, said plans can change because of a variety of factors and that utilities need flexibility. He also cautioned about “customer dissatisfaction” if a utility had to change plans and eliminate specific projects that had previously been disclosed for the second and third years.

“We certainly don’t want to be locked in for years two and three because we identified certain projects in year one,” Rubin said.