Dorian Could Knock out Power for Millions 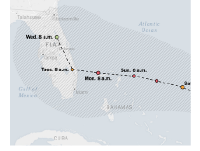 Lengthy and widespread power outages are in the forecast after Hurricane Dorian hits Florida.

Eric Silagy, president and CEO of Florida Power & Light, said Friday the state’s largest utility is ready for the storm, with crews and equipment positioned to start restoring power after sustained winds dip below 35 mph.

But Silagy said the hurricane, which is forecast to make landfall early next week somewhere along Florida’s East Coast, will require rebuilding parts of the electric grid, resulting in restoration efforts that could be “extensive.”

“There will be power outages from the storm,” Silagy said after giving Gov. Ron DeSantis a tour of the company’s command center in West Palm Beach. “There is no doubt that if the storm comes on with the kind of power that is currently predicted there will be significant outages.”

Tropical-storm force winds are expected to reach Florida by Sunday morning, with hurricane winds hitting Tuesday morning, according to the National Hurricane Center’s forecast Friday afternoon. With the hurricane expected to be a Category 4 storm, it could cause massive damage.

The “cone of probability,” which offers a general idea of where Dorian could make landfall, stretched Friday afternoon from the lower Florida Keys to South Carolina, though it was centered in the area of northern Palm Beach County and the state’s Treasure Coast, according to the National Hurricane Center.

FPL provides electricity along most of Florida’s East Coast. It has secured about 16,000 employees and workers from other companies, “with plans for thousands more” for the anticipated restoration effort, Silagy said.

“These guys are going to work hard to get the power back on, but it’s not like the storm comes and in 24 hours you’re going to be guaranteed (power restoration). There could be extended periods where you don’t have power,” he said.

At least 7.5 million people are projected to be without power across Florida because of Dorian, according to a Friday morning projection that is expected to increase as the storm’s track is better known.

FPL, which serves 10 million people through roughly 4.9 million customer accounts, had to restore power to 4.4 million customers because of Hurricane Irma, which traveled up the state from the Keys to Jacksonville in September 2017.

Restoration took about 10 days before it was considered completed to all but the most-damaged properties.

Duke Energy, which provides electricity in parts of Central Florida, has said it anticipates “damage to its infrastructure that may result in extended power outages.”

“We join state officials in asking everyone to take this storm seriously and prepare now. We also ask our customers for their patience,” Duke Energy Florida storm director Jason Cutliffe said Thursday. “With a Category 4 hurricane, power may take several days to restore.”