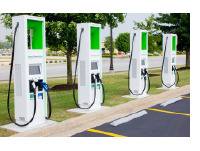 State Rep. Dan Daley, D-Coral Springs, has filed a bill aimed at increasing the number of electric vehicle charging stations in the state, similar to a Senate proposal that started moving forward last week. Daley’s proposal (HB 943) seeks a master plan for electric vehicle charging stations across the state highway system. “There are over 14.2 million registered vehicles in the state, not including the millions of tourists that visit each year,” Daley said in a prepared statement Monday.

“These vehicles create a substantial amount of pollution. These harmful emissions are being released into our atmosphere and absorbed by our oceans, which is leading to drastic changes.” The bill would require the Department of Transportation to coordinate the master plan with the Department of Agriculture and Consumer Services’ Office of Energy and the Florida Clean Cities Coalitions.

The Senate Infrastructure and Security Committee last Tuesday advanced a proposal (SB 7018) that would direct the Public Service Commission to work with the Department of Transportation and the Department of Agriculture and Consumer Services on electric vehicle charging station infrastructure. The Senate bill also would seek a legislative declaration that electric vehicles can help reduce carbon dioxide emissions, which would help “reduce the impact of climate change” in Florida.

“Climate change may have significant impacts to this state which will require the development of avoidance, adaptation, and mitigation strategies to address these potential impacts on future state projects, plans and programs,” the Senate bill said. Sen. Jose Javier Rodriguez, D-Miami, also has filed a separate bill (SB 452) that is identical to Daley’s measure. The bills are filed for the 2020 legislative session, which starts Jan. 14.