Proposal Would Plug in Higher Fees for Electric Vehicles

Posted By: Garnie Holmes in Legislative/Regulatory , 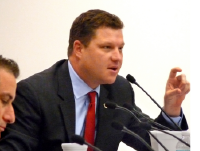 Annual fees on electric vehicles would go up to help build charging stations as the state anticipates a continued move away from gas-powered cars and trucks, under a proposal backed Tuesday in the Senate.

Sen. Jeff Brandes, a St. Petersburg Republican who has been an advocate for new vehicle technologies, wants fees to seed a grant fund of about $10 million a year so public and private companies will set up what are known as fast-charging stations ahead of increases in demand.

“It would help at least early on to establish that infrastructure,” Brandes said. “Otherwise, they may wait another five or six years in order to establish that infrastructure. The Flying Js, the Pilots, the RaceTracs of the world (may) not be willing to install DC fast charging (stations) because it's not economically viable for them. But with the grant program, it becomes more economically viable for them to offer some type of DC fast-charging product.”

Brandes anticipates the share of electric vehicles on Florida roads, now less than 1 percent of all traffic, to hit 15 percent to 25 percent by the end of the decade.

Members of the Senate Transportation, Tourism, and Economic Development Appropriations Subcommittee unanimously supported the proposal, repeatedly calling the proposal a good conversation starter. Parts of the proposal are in two bills (SB 138 and SB 140) approved Tuesday by the panel.

“Five years, 10 years from now it's going to be right here on us, and we're still going to be sitting here if we don't start doing something saying how we're going to solve this problem.” Senate Majority Leader Debbie Mayfield, R-Indialantic, said.

“There's more work that's going to have to be done on this particular issue,” Mayfield continued, as she addressed Brandes, who is term-limited in 2022. “And you'll have hopefully one more year to help us guide through this process.”

Under Brandes’ proposal, fully electric cars would be charged $135 a year on top of existing license taxes, with tractor-trailer trucks and other vehicles that weigh 10,000 pounds or more facing a $235 a year charge.

Plug-in hybrid electric vehicles, because they still require gas, would draw a flat fee of $35. The bill would exempt low-speed vehicles such as golf carts, according to a Senate staff analysis.

The annual fees would increase by $15 in 2025, and the Legislature would be asked to consider the future of the fees in 2030.
Brandes said the fee totals were designed as a middle ground to make up a portion of the gas tax revenue anticipated to be lost as more people move to electric vehicles. He noted that a Ford F-250 pickup can generate around $235 a year in gas tax revenue.

Similar measures in the House (HB 817 and HB 819) have not appeared in committees.

A concern for lawmakers is that the money wouldn’t replace gas-tax dollars that now go to transportation projects.

“Eventually, I think we'll have to dedicate more of this revenue towards the actual infrastructure maintenance and building new roads,” said Sen. Ed Hooper, R-Clearwater. “But I think it's a good start.”

Brandes said after the grant program gets established, the Legislature could direct the electric-vehicle fees into the annual road program.
To build his case for the proposal, Brandes said it also could help the state in hurricane evacuations.

“We have an infrastructure today that struggles to support internal combustion engines evacuating at scale,” Brandes said. “Thinking about adding electric vehicle charging infrastructure in places that can charge at a scale, that's fast enough to evacuate, is something that I think we need to be thinking about and considering. It's one of the bigger challenges that's really a Florida challenge that many other states aren't going to have to face.”