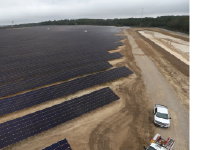 The Tallahassee City Commission voted unanimously to adopt a Clean Energy Resolution, further strengthening the City of Tallahassee's commitment to sustainability. Developed in collaboration with Tally35, the City's Utility Citizens Advisory Committee and the local chapter of the Sierra Club, the resolution outlines the City's goal of moving the organization and community to 100 percent renewable energy by 2050, including setting milestone markers.

"The City has long been a pioneer among municipal governments in adopting environmentally sustainable practices," Mayor John Dailey said. "This resolution helps solidify our plan for the energy future of Tallahassee, ensuring that we take the necessary steps to protect our valuable natural resources."

The following milestone markers were adopted as part of the effort to reach the ultimate goal:

Progress is already being made toward these milestones. StarMetro, the City's mass transit system, is in the process of purchasing 15 new, all-electric buses as part of a partnership with Florida State University. This means one-third of the City's daily bus fleet will be electric, and it will create one of the first all-electric campus bus systems in the nation. StarMetro first began using electric buses in 2013. At that time, it had the largest all-electric, fast-charging bus fleet on the east coast.

On the path to 100 percent clean renewable energy, the City's will continue to reduce greenhouse gas emissions as much as possible. Because of its focus on sustainability, the City's Electric Utility has already reduced emissions beyond the set goals for both the 2020 Paris Accord and the Kyoto protocol. It is on track to surpass the 2025 Paris Accord goal well before that time.

As part of this effort, the City is expanding its solar energy production. Tallahassee's first commercial solar farm, which is a 20-megawatt (MW) facility, came online at the beginning of 2018, and construction on Solar Farm 2, which is slated to be a 40MW facility, will begin later this year. The new facility is expected to be operational in 2020. Other utilities in Florida are looking at the City's solar program as a best practice, and the City was recognized by Environmental American as a Solar Star.

As the community works to reach the ambitious goal set by the Clean Energy Resolution, the City will continue to focus on its operations and customers' energy use. From incorporating compressed natural gas-powered vehicles within the City's fleet to performing more than 58,000 free energy audits for customers, the City's wide-ranging endeavors have and will continue to reduce the community's dependence on fossil fuels, reduce emissions and improve local air quality.

Enjoying a clean, healthy environment is a hallmark of life in Tallahassee. The City is dedicated to remaining at the forefront of progress while balancing environmental concerns and community desires with providing reliable, cost-effective service.

Learn more about City operations and its many sustainability programs at Talgov.com.